Your Voting Rights and Why You Should Treasure Them 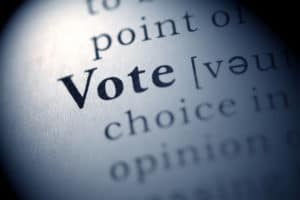 With our hands over our hearts, we have all repeated the familiar words:  I pledge allegiance to the flag of the United States of America and to the Republic for which it stands…. Regardless, most people, when asked, will quickly cite without hesitation, that the United States is a Democracy. While a commonly held misnomer, technically their answer is incorrect. The “Republic for which it stands” seemed to have fallen through the educational cracks of time- with little notice and many have never understood the terms. It’s pretty important.

A Republic form of government is one established to adhere to the rule of law. Whereas a Democracy operates under the rule of the people. While Democracy sounds superior, our founding fathers, as they pondered the best way for our fledgling country to proceed, harbored serious doubts about Democracy and weren’t shy about expressing them. The following is a good sampling:

“We are a Republic. Real Liberty is never found in despotism or in the extremes of Democracy.” – Alexander Hamilton (1755-1804) Lawyer, Secretary of the Treasury, Secretary of State

“Democracy is the most vile form of government. … democracies have ever been spectacles of turbulence and contention; have ever been found incompatible with personal security or the rights of property: and have in general been as short in their lives as the have been violent in their deaths.”

So, based on fears of fickle masses, and also a strong response to the offensive British monarchal and parliamentary roots, America was purposefully established as a Republic. The rule of law, on these shores, was intended to be preeminent, to protect us from ourselves. The people are taken care of under the auspices of a carefully crafted Constitution… making us a “Constitutional” Republic.

Innate protections, of course, were imbedded. The three separate branches of government, as well as a critical electoral college to prevent high population states from ruling the country. What has developed over the past 200 plus years has evolved slowly to become a Democratic Republic whereby a very broad electorate, often with little “skin in the game,” so to speak, are able to vote for those who pass our laws, enact the bills and hopefully protect our established freedoms.

However, with the Constitution as our guide, and laws and lawmakers awaiting the voter’s pleasure－America of the people, for the people and by the people have had a very interesting developmental history through the years:

*In 1776, voting in America- as in most of the developed world- was limited to men. More specifically, white men 21 years and above, who owned at least a modest amount of property. This is something important to consider in the 21st Century, as we have moved further away from those Republic origins and skip towards embracing Democratic Socialism. “Property Ownership” (of some kind) was a reasonable caveat to the privilege of casting a vote. Property owners have the greatest stake in the operation of the local, state and federal government because people who have nothing don’t pay taxes—people that have property, any kind of property, have a tangible stake with something to lose.

*By 1868– on the heels of a bloody Civil War over slavery, The 14th Amendment was passed during a rocky Reconstruction period to answer the discriminatory distinction: are the newly freed slaves really citizens?  The 14th Amendment immediately transformed men of color from legal limbo, establishing them as  legal citizens with most requisite rights.

This provision has since been extrapolated and interpreted that anyone born in the United States is a full-fledged citizen status and offering relatives of such a baby the means to invite “chain migration” of many more family members from any country.  Currently under fire by the Trump Administration as a tempting carrot to encourage “anchor babies,” President Trump has repeatedly made statements declaring the Original Intent of the 14th Amendment was not to grant citizenship to anyone who happened to be born here. According to President Trump’s recent statements, the 14th Amendment has outlived its usefulness and should be set aside.

*Just two years later in 1870, the 15th Amendment to the United States Constitution eliminated the “white men only” provision to voting rights allowing newly freed slaves  the privilege of casting a vote. Native Americans were not included until 1924 when the Indian Citizenship Act granted Native Americans both their citizenship and voting rights.

*In 1920 the 19th Amendment was passed granting all American women their suffrage. We are quickly arriving at the 100th anniversary of Women’s suffrage and have become a powerful demographic voting force at every level of American government.

*Voting legislation simmered down until 1964 during the LBJ era that the federal Civil Rights Act was enacted to ensure that all men and women above the age of 21- regardless of race, religious preference or educational background have the right to vote.  Passage of the 24th Amendment to the Constitution eliminated any poll taxes which were common at that time, which might inhibit someone’s ability to participate in the vote.

*This was soon followed in 1965 by the Voting Rights Act which suspended any literacy tests to qualify for casting a vote. Voter registration and voting rights are now carefully and federally enforced.

*It wasn’t until 1971 that the qualifying voting age was dropped from 21 to 18 years of age.  At the time, the primary argument for change was that young men were deemed old enough at 18 to be drafted and sent to Viet Nam, but were not considered qualified to vote for the leadership that was sending them there.

*The 1986 Uniformed and Overseas Citizen’s Absentee Voting Act assured that United States Military and Uniformed Services, Merchant Marines and other citizens overseas, living on bases in the United States abroad or aboard ships are granted the right to vote. 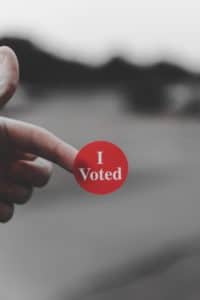 American Voters are the envy of the world. The privilege to have a voice in our governance is a wonderful, if fragile, responsibility.  Our country sits at an absolute crossroads－and it is the American voter who will decide in 2020 if we will pursue the fiscal and moral policies and ideologies to preserve our God-given Constitutional Rights, or fritter them away for a false sense of security and a redistribution of wealth touted by those who are happily skipping towards Socialism.

Blessings Through Action and Our Action Place are dedicated to the founding principles of faith, freedom and original intent- upon which this country was established. It is vitally important that our readers rally and unify around the issues which resonate with Christians: Issues that will preserve the lives of innocent babies, issues that firmly establish our sovereignty as a nation and preserve the rule of law and order. These are moral compass issues to preserve our Constitutional rights and put the safety and security of American citizens before the rest of the world.

Winston Churchill once famously noted, with tongue in cheek, “The best argument against democracy is a five minute conversation with the average voter.”

While one doesn’t like to disagree with the British PM—we can assert that we are not “average voters”!  Our Action Place was designed to unify Christians and give them a platform to freely speak without fear of censorship. We encourage you, as Christians, in the last real bastion of freedom in this world, to help keep it that way! Make sure you are registered to vote and let your voice be heard!  With the pivotal 2020 election on the horizon much is at stake: Stand together in One Voice. It is critical that we- Speak up, Take Action and Vote!