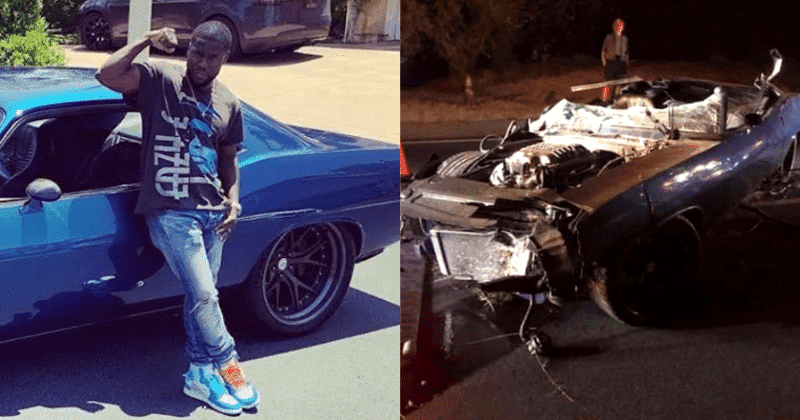 Comedian and actor Kevin Hart praises God for saving his life after a devastating car crash.

Hart sustained significant injuries to his back. Three spine fractures, two in the thoracic section and one in the lumbar, according to published reports after his 1970 Plymouth Barracuda drove off Mulholland Highway and rolled into an embankment in Calabasas, Calif on Sept. 1. Hart spent 10 days in the hospital following the accident.

Driver Jared Black and his finance were also injured. “I have nothing but love for Jared and wish him and Rebecca a speedy recovery,” a statement from the star reads about the crash.”

On Instagram, the 40-year-old spoke out for the first time since the crash.

Hart added that when you’re propelling fast in life, and you’re doing too much, sometimes “you can’t see the things that you’re meant to see. After my accident, I see things differently. I see life from a whole new perspective. My appreciation for life is through the roof.”

He assessed that when “God talks, you gotta listen. I swear life is funny. Because some of the craziest things that happen to you end up being the things that you needed most. And in this case, I honestly feel like God told me to sit down.”

In 2018, Hart had another fright after his private plane blew a tire at Boston’s Logan Airport on the runway. Hart and others started praying and thankfully, no one was injured. “God is Good with a capital G,” he posted on Instagram.

God is Good with a capital G…Had our first serious Airplane scare today. Our planes tire busted on one side as we were landing and shit got real for a second. No body was harmed…Our pilot handled the situation perfectly. Once again God is GOOD!!!! #Blessed ….P.S you Can tell that spank is still shaken up by the way he is posing 😂😂😂