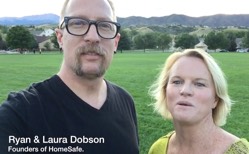 Ryan Dobson knows something about the importance of preparedness and security. His father, Dr. James Dobson, founder of Focus on the Family, was under constant threats as the most influential spokesman for conservative social positions during the 1980s. Dr. Dobson took a bold public stance against pornography and gambling, and the family received death threats from members of organized crime.

“You have to take this stuff seriously and learn situational awareness. As younger people, we learned if someone was following you, would you know? And what would you do? We had cell phones in our cars when I was 17-years-old in 1987,” says Ryan.

Additionally, Dr. Dobson experienced the pain of losing a pastor friend of his, who was shot by a congregation member. Eventually, the family hired armed security guards and were taught to be very security-minded.

The 1980s are gone and no longer can people rest on their laurels. Society and culture have evolved, and the church needs to be on guard. In light of another church shooting in Texas on December 29, now is the time to prepare and to protect our churches. This is just one of the reasons Ryan, in partnership with Cove Home Security, founded HomeSafe, a church-based training program designed to empower families with tools to immediately address a myriad of threats.

In 2016, 65 violent deaths—defined as homicides, suicides, and aggressors killed in action—took place at churches or ministries. Only 25 percent of churches have security today. Why? Ryan believes it is fear of the unknown.

“We had a lot of people here in Colorado after the Aurora theater shootings (2012) who would not go to the movies. I had a lot of friends who didn’t go to the movies for two, three years after that. I understand it but you need to know what to do. If you talk about it, you’re going to make people paranoid. I don’t think so, I think it makes them prepared.”

His company, Home Safe, wants to change the narrative. The new church-based training seminar supports parents with the strategies and tools to protect their families at church, school, in public places, and at home. It serves as a critical reference tool, so families don’t have to rely on hope instead of relying on an attitude of “Ready, Able, and Willing” to deal with any threat.

For example, he recommends that “When you enter a room, know where the entrances and exits are, and where would you go if something happens. We teach that in our program.”

Watching the video of the shooting in White Settlement, Texas, Ryan shares that no one in that congregation had any idea what to do when the bullets started flying.

“They are just sitting there stunned and their brains can’t comprehend what’s going on. They don’t know if it’s a training exercise? What’s going on? And nobody is leaving. The last conversation you want to have with your wife is when the bullets start flying. A month ago, there was a guy at our church behaving oddly, and I just moved my family,” he says. “I tell people that the worse that’s going to happen is nothing. And nothing happened that day. If something did happen? I am so glad that I moved my family.”

In Texas, security saved lives. “Their quick action saved countless lives. We really thank the Lord there was security because it was over in six seconds.”

Practicing situational awareness, knowing your surroundings and what to do in case of an incident, is paramount in staying safe at church, school or wherever you go.

“It’s a new era we live in and it needs to be addressed.”