The freedoms of Americans are at stake and secular society is whittling away at our Judeo-Christian roots. A spiritual and political infantry is operating against our liberties and family values.  If we look at the nation’s public schools, libraries and in Congress — the changes are dexterous.

No doubt – we’re engaged in a battle to defend our Christian rights.

Christians are ridiculed and bullied because of their religious beliefs. If they speak or even pray in public, complaints are lodged. Perhaps, our leaders and citizens need to be reminded of the First Amendment. 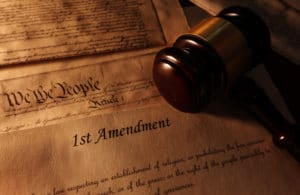 People can’t select and choose what liberties they fancy on a given day. The First Amendment is for all people, all creeds and all faiths. It’s the bedrock of our nation.

Do you remember former Kentucky county clerk Kim Davis? Davis made headlines in 2015 for not issuing a marriage license to a gay couple. She was sued for her convictions and was jailed. Former Arkansas Governor Mike Huckabee stood by her side, tweeting.  “I was honored to meet w/ #KimDavis. A woman of such strong faith and conviction.”

Jack Phillips, a Colorado resident, and owner of Masterpiece Cakeshop was sued the third time for refusing to make a transgendered birthday cake. Phillips said he serves all people. However, he won’t incorporate specific messages on cakes that honor divorce, celebrate Halloween, same-sex marriages or messages of any sexual nature. The drama for Phillips originated in 2012 after a gay couple requested a custom wedding cake and sued after they were refused. After the Supreme Court granted review, it ruled in favor of Phillips in 2018. Later that year, a transgender woman, Autumn Scardina, sued the baker for not designing a cake. The case was dismissed.

Doctors and nurses are similarly being compelled to abandon their morals to support abortions. This is a violation of their right of conscience. The American Center for Law and Justice filed briefs in support of federal regulations supporting healthcare workers. The brief argues “The Final Rule’s enforcement of federal statutory protections for conscience, whether that conscience be formed by religious or moral beliefs or both, falls squarely within our country’s historical practice of honoring the rights of conscience. The Final Rule does not violate the Establishment Clause.”

A women’s shelter is at the center of a lawsuit in Anchorage, Alaska. The Downtown Hope Center provides meals, protection, showers and job training to all people during the day. At night they specifically serve battered women escaping abuse, sex trafficking and rape. A man dressed in a pink nightgown came to the shelter wounded and drunk in 2018. He was given a taxi ride and transferred to the hospital. He filed a complaint with the Anchorage Equal Rights Commission that he was discriminated against because of gender identity.

“Downtown Hope Center serves everyone, but women deserve a safe place to stay overnight,” said Alliance Defending Freedom Senior Counsel Kate Anderson in a statement. “No woman—particularly not an abuse survivor—should be forced to sleep or disrobe next to a man. The court’s order will allow the center to continue in its duty to protect the vulnerable women it serves while this lawsuit moves forward.

The infringement of our rights doesn’t influence one or two people. It affects all of us. More disconcerting our rights being violated for a political agenda. “Moderates just don’t seem to exist anymore. From the perspective of right-wing conservatism, the left has gone way off the deep end, espousing ideologies that only a few years ago, would be patently absurd, such as the idea of opening up locker rooms, restrooms and dressing rooms to persons of the opposite sex who psychologically “identify” with the opposite sex. It all seems to be part of a growing fairytale type of narrative in which a person can simply create his, her, or its reality,” Christian Rights Ministries said.

Eighty-three percent of Americans are Christian. That’s a huge population — an outfit efficacious to vote — to keep our liberties unimpaired.  When we seek God, investigate and are aware of what’s taking place in America, change takes place.

Soon the soft whisper becomes a roar for the church and for our nation.