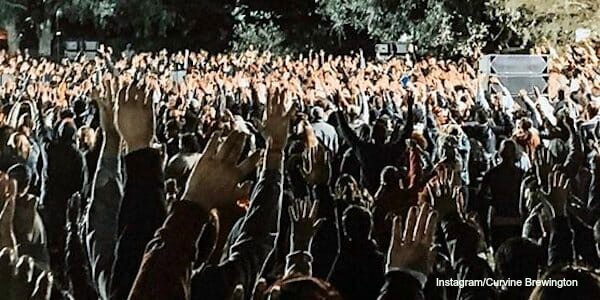 “I got to experience Kanye West’s Sunday Service at @bethany_church in Baton Rouge. If you’ve ever doubted the legitimacy or spiritual impact of this #sundayservice project, simply look at this incredible shot taken by @the.smitan during the altar call. YES, I said ALTAR CALL,” wrote student ministry pastor Curvine Brewington on Instagram. “Say what you want, & think what you want … But trust me when I tell you – The Spirit of the Living God was indeed present.”

Tonight, @candacebrewington & I got to experience Kanye West’s Sunday Service at @bethany_church in Baton Rouge. If you’ve ever doubted the legitimacy or spiritual impact of this #sundayservice project, simply look at this incredible shot taken by @the.smitan during the altar call. YES, I said ALTAR CALL. 😲 Tonight, worship was lifted, the name of Christ was exalted, the Word of God was preached, a multitude prayed together, the Gospel was clearly proclaimed, and an opportunity to respond was given. In a crowd of 6,000 people from all walks of life, all ages, and all races, i witnessed over 1,000 people respond to The Gospel by raising their hands to accept Jesus as their Lord & Savior! 😱🙌🏾 Say what you want, & think what you want…. But trust me when I tell you – The Spirit of the Living God was indeed present. I danced, wept, stood in awe of God’s redemptive work, & can honestly say that tonight I witnessed a new wave of REVIVAL first hand. #Jesusisking • Isaiah 43:19 “Behold I do a NEW thing. • 1 Corinthians 1:27 “But God chose the foolish things of the world to shame the wise; God chose the weak things of the world to shame the strong. • #excited #inspired 📸 @the.smitan

Not all people are supporting West and his conversion to Christianity. The mainstream rapper received an onrush of ridicule in the media and from other believers after releasing the album, Jesus Is King, on Oct. 25.

One person responded to the Instagram post of Brewington quoting Matthew 24:24 “For there shall arise false Christs, and false prophets, and shall show great signs and wonders; insomuch that, if it were possible, they shall deceive the very elect.”

However, people like Everybody Loves Raymond actress Patricia Heaton, a Catholic, is supporting West to endure in his faith. She also gave him advice. “I think when someone of his stature in the industry and someone who has his amount of fame makes that kind of proclamation, people then really watch and scrutinize everything he does to catch him falling down. I hope that he is able to handle that because that’s what’s going to happen,” she said according to published reports.

West preached during a Sunday service at New Birth Missionary Baptist Church in Atlanta, Ga. in September and said people can’t be concerned about the opinions of men. “Only the opinion of God. I know we say this is the culture or that is the culture. To be radically in service to Christ is the only culture that I want to know about.”

Regardless of various opinions, West is encouraging people to learn more about Christ and the Bible. The American Bible Society announced they will send up to 1,000 free Bibles to any West fan curious about Jesus.

“Kanye West’s album has had an immediate effect on the current news cycle. ‘Jesus is King’ was a trending internet search last week (week of October 28) with over 1 million queries on Google alone,” said Dr. John Farquhar Plake, director of ministry intelligence at American Bible Society in a press release. “Coincidentally, something we’re seeing as a rising trend is that most Americans turn to Google as a de facto spiritual guide. Our goal with this campaign is to give Americans—and, yes, Kanye fans—the opportunity to look for answers to their most pertinent questions at the source.”

West grew up around Christianity. His father was a former Black Panther and became a Christian marriage counselor. Adam Tyson, a senior pastor of Placerita Bible Church in California has been working with West and shared about the celebrity’s salvation on The Pure Flix Podcast.

“[West] would say he knew about the things of God. … He said he was running from God. “The first time I talked to him the first Sunday in June, he told me, ‘I got radically saved five weeks ago.’ I said, ‘Kanye, what happened five weeks ago?’ He said, ‘I was just under the weight of my sin and I was being convicted that I was running from God, and I knew I needed to make things right, so I came to Christ. I came out of darkness into the light.’”