Our Action Place App | One Body, One Voice 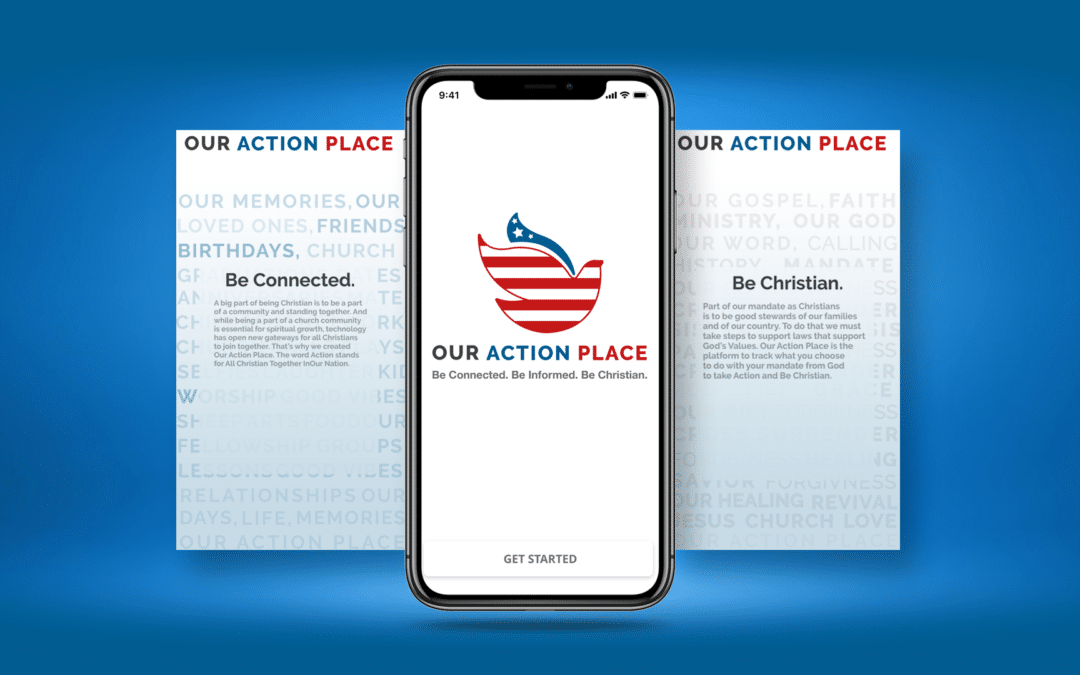 It is one place which transcends geography. One community that follows the Christian principles our nation was founded upon. One Christian body standing strong in a polarized nation, regardless of respective denomination: And, all through a technology platform built for and by believers. Does this sound too good to be true?  Fear not friends, you can find like-minded people on one social media network for Christians.

Our Action Place application by Blessings Through Action is a social media interface for Christians to interact safely with other Christians with the corresponding political views and most of all – furthering the Kingdom of God.

This new and growing social media network invites all Christians to connect nationally and change our nation for the glory of God.

Mainstream social media networks persist in filtering conservative views and work hard to extinguish the opinions of Christians. President Donald Trump is right when he said in 2018 about the infiltration of tech giants monitoring what news is distilled to the masses and its bias: “Google results are biased against Republicans.” Social media giants like YouTube, Twitter and Facebook) filter conservative news, and pushes its agenda. Google was questioned by Congress June 2019 for its anti-conservative bias, anti-competitive conduct and collection and usage of personal data. The investigation is ongoing.

The bottom line is we can’t control these entities who regulate and censor our information, but we can choose an alternative.

The good news is Christians now have a platform to make their voices heard with Our Action Place. This is an important time in our history to move forward with a social media network for the body of Christ. Technology will only continue to advance, and Christians need to move with it and ahead of the curve. “ In 2019, it is estimated that there will be around 2.77 billion social media users,” according to Statista.

Where does Our Action Place -which we  often lovingly refer to as Our Place-fit into this picture? Through the Our Action Place platform, people can unite with one other in prayer about ending Planned Parenthood or anything antithetical to the will of God. They can post articles, breaking news and headlines which affect Christians in America. They can talk freely about God , unite in prayerful agreement, or discuss the truth regarding the prejudice against believers. Some subjects often discussed in the headlines are kids being suspended for praying openly (the U.S. Supreme Court banned school-led prayer in 1962 as a breach of the separation of church and state, but it’s fine to pray in private). Some kids and coaches are criticized for praying on the football fields before games. These are just some things to be discussed as a community and how we can change things for the betterment of the country and for our children.

There’s more. Another exciting feature on the app is called the “action of the day.” The definition of action is the process of doing something, typically to achieve an aim and doing it more than once. People can present an “action of the day” suggestion for people to do for the day.  An action could be to pray for our president, local civic leaders, or reaching out to a single mom.

Founder of Blessings Through Action and Our Action Place, Elaine Beck and her husband, Bob are from Oro Valley, Arizona. She shared the value of the app and becoming a united front in America. “God is asking us to do this because he wants people in this nation to no longer step aside and be shoved out of the way. Our voices need to be heard.

Elaine is right – we need to be heard. As Christians, we are stronger together. When we’re linked together arm-and-arm, progress happens — our voices are heard in Washington, D.C. Our voices shape our world for Jesus, and soon political leaders will listen.

Life can be burdensome, especially if we feel isolated politically, spiritually or physically.  But you don’t need to carry any burdens alone. In 1 Thessalonians 5:11, we are reminded to lift each other up and this resounding truth remains true for us today, “Therefore encourage one another and build up one another, just as you,also,are doing.” Our Action Place is a community where we can feel like there’s family supporting us when we feel alone in a politically divisive and harsh world.

The Our Action Place app is available from the Apple and Android stores.