John Ladd: Rancher on the edge of a Nation – Part 1 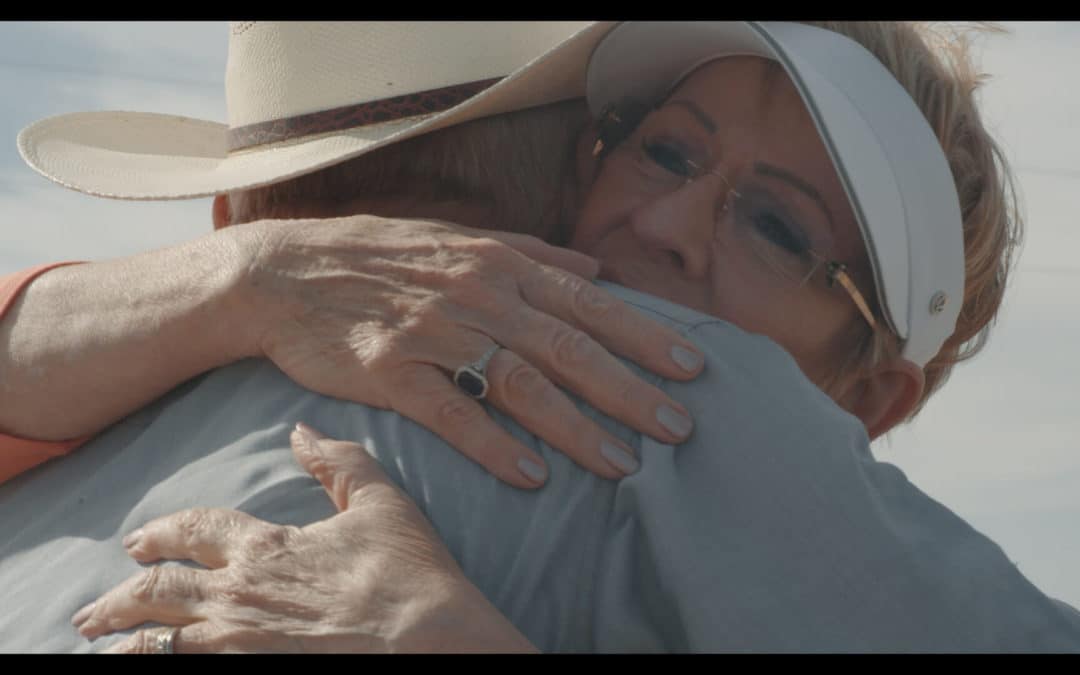 By ranching standards, much of the morning had burned away by the time the Blessings Through Action (BTA) team rolled into the entrance of Ladd’s San Jose Ranch in Cochise County, Arizona.  A red Chevy pick-up with a bale of hay in her bed, soon arrived in a swirling cloud of dust. Wearing a white cowboy hat, John Ladd -cattleman, Christian family man, engineer and eloquent spokesperson for besieged property owners along the border, stepped down to greet us and share his unique insights regarding life on the edge.

Ladd’s 16,000 acre San Jose Ranch sits in the cross-hairs of what has become a huge issue highlighted by President Trump’s call and campaign promise to build an impenetrable wall of fencing along the U.S.- Mexico border. Stretched along 10.5 miles of this border is the San Jose Ranch. Original fencing which was woefully inadequate has been replaced by a crazy quilt of various type and quality by different administrations. The border fence is overseen by the United States Border Patrol (USBP) with the aid of cameras and sensors. Along with a herd of about 500 Hereford cattle, his range is filled with tufts of scrubby grass,  paddle cactus, the occasional scraggly mesquite tree- and little else. 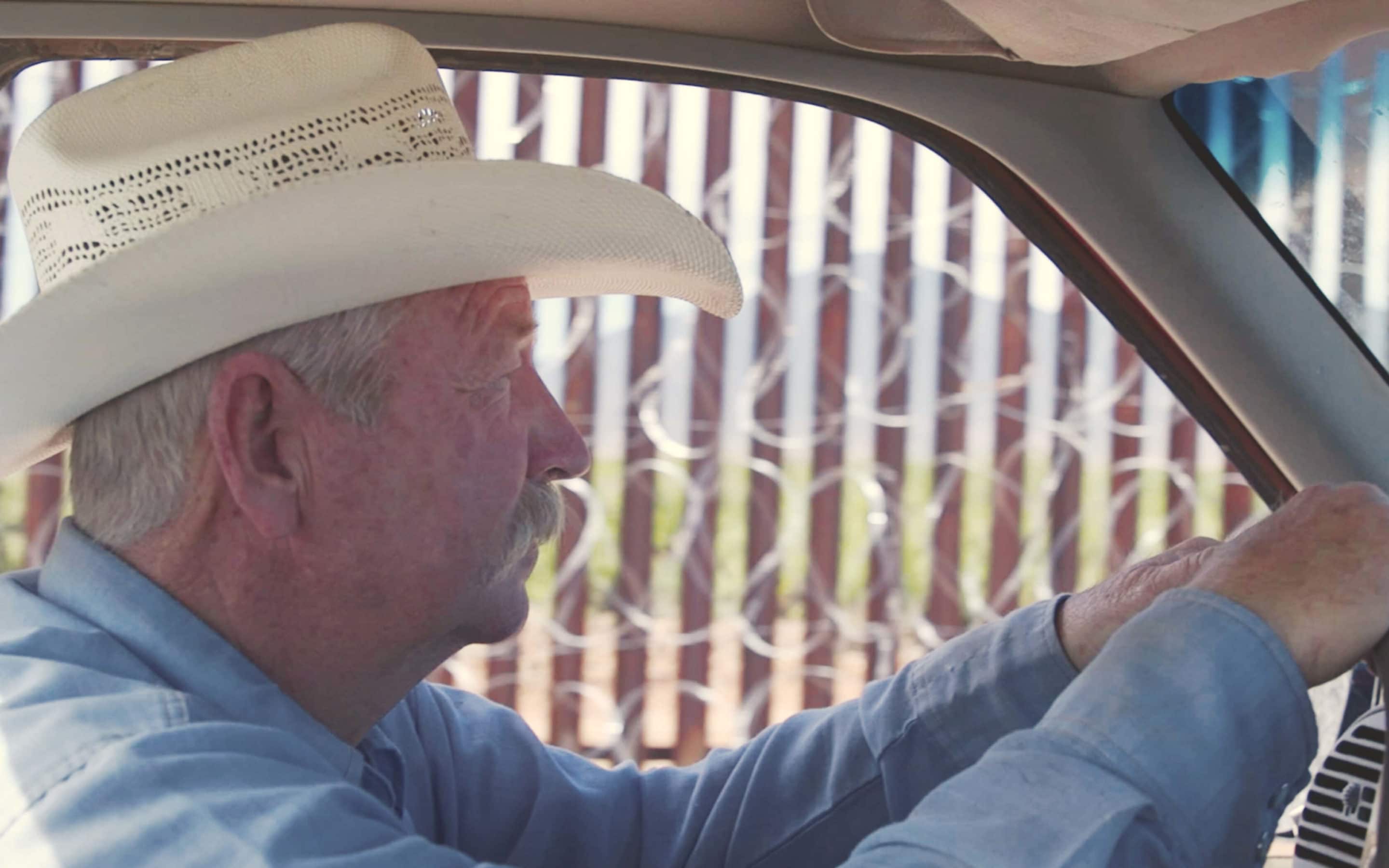 The scenery, and this rancher with his rugged good looks, might have been borrowed from any Hollywood western. However, once told, his disturbing truths are not at all pastoral nor picturesque. Following glorious evening sunsets, night drops quickly into every crevice of the high desert.  As the family drifts to sleep, a low-pitched growl and a warning bark from Ladd’s vigilant dogs alert the family to possible intruders- bringing the family to full alert. Far from any city lights, deepening shadows cloak every outbuilding of the Ladd family compound, perfect cover for any illegals slipping across the border to find a new life just seeking shelter, or something to pilfer as they pass. Others cross his property with darker intent, determined “mules” carrying expensive deliveries for a waiting cartel contact. The Ladd’s have experienced it all.

The rancher calmly relates stories of break-ins and midnight “rattles and banging” as faceless intruders attempt to gain entry.  There is no safe room or place of safety he says, responding to a query from Beck. “The only safe place is behind a shotgun.” He calls that weapon an equalizer. Noting that his entire family know how to shoot, he cushions his statement with compassion, backed with steely strength, “We don’t want to shoot.” He adds, “We don’t go out and confront intruders, but we aren’t leaving, we aren’t going anywhere and we aren’t going to be intimidated.”

It is difficult, however, to imagine the weight of sustained stress which this business owner and family man must shoulder- staying ever-alert, head on a perpetual swivel as he- and ranchers just like him along the border- watch for dangers, real and imagined. How tough is it on a cowboy to leave his spouse or elderly parents home alone with only a shotgun for defense, as he and his sons spend hours in distant pasture, working the cattle? One wonders, and worries for the Ladd’s and others like them, living in the danger zone.

As the candid morning interview with Blessings Through Action (BTA) founder and visionary, Elaine Beck progresses, the promise of today’s unrelenting inferno is borne on the wings of a persistent, arid wind. A typical July day in Arizona can see soul-crushing temperatures well before noon. 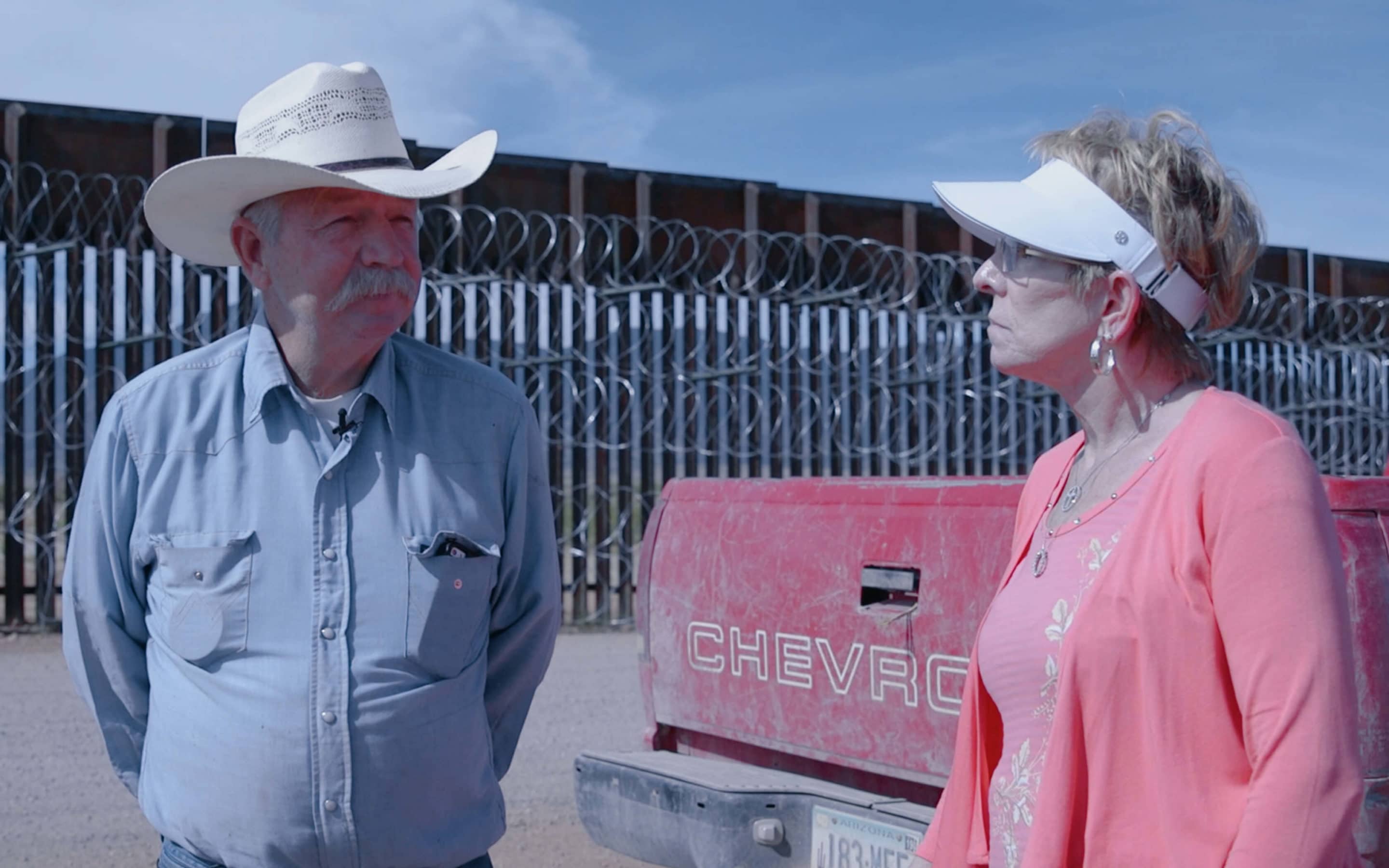 Ladd, hosts a tour, and in his steady, matter-of-fact manner, relates changes witnessed on his watch.  He recalls a time when Mexican families came across with parcels and luggage eager to work hard for a better life in the states. “Now, we are seeing immigrants just coming for what the government will give them.”

The family long ago offered an easement to the USBP for fencing and roads. As we explore the 18 foot, bollard fencing which is looped with rows of intimidating razor wire on the U.S. side, Ladd mentions rising cartel activity and narcotics smuggling frequently  during the interview and notes concerns about skimpy coverage by Border Patrol agents.

Further down the border road which parallels the fencing, Ladd pulls his truck aside to highlight what he considers a big problem area. At the base of the formidable fencing “floodgates” stand wide open at every low lying spot.  “Do you see any Border Patrol agents?” he asks pointedly. We hadn’t passed any in quite some time, and none of their vehicles were visible on the horizon.

The open gates at the base make the security measures appear ridiculous. To prevent silting and erosion, Ladd explains the USBP leaves the heavy 5 ft by 5 ft. metal gates agape to allow an unobstructed wash of debris and monsoonal flash floods to flow through. “They are afraid that the Army Corps of Engineer fancy fence will fall down.” We counted six open gates on this morning with not rain cloud in sight. Here, nothing but a few strands of barbed wire stand guard in the arroyos betwixt the two countries.

A long time USBP agent from the Tucson sector was willing to discuss these matters in general terms. Speaking to Ladd’s concerns, he claimed open flood gates are left open to allow flash flooding to pass on through. Supporting what Ladd suggested, the agent said the frequent flooding might eventually erode the integrity of the fencing.

Quizzed about the lack of the “visible patrols” which worried the border rancher, this BP source agreed that many more agents are needed. To compensate for manpower deficits he said, agents rely on cameras, tethered balloons, as well as a series of underground movement sensors to monitor this type of rugged area. “You may not have seen anyone,” he said, “But, you were likely being watched onscreen, the entire time your group was there.”

As the saying goes, the proof is in the pudding.  Though he supports the USBP, Ladd has consistently found Agency methods lacking. He measures effectiveness by hard evidence. A prime example came at the 10 foot- high pedestrian mesh fencing erected during the George W. Bush era. Ladd shows evidence of where the heavy 6 X 6 inch posts had been whacked down, the mesh panels then pushed down for vehicle access. “In the past 4 years,“ he states, “54 pickup trucks have come through here with loads of drugs…Not one, that I’m aware of, has been caught.”  In fact, the problem was so pervasive at this natural transit point along Ladd’s side of the border road, permanent concrete barriers are still placed to protect his fencing which was mown down repeatedly as those trucks ran right through his range. 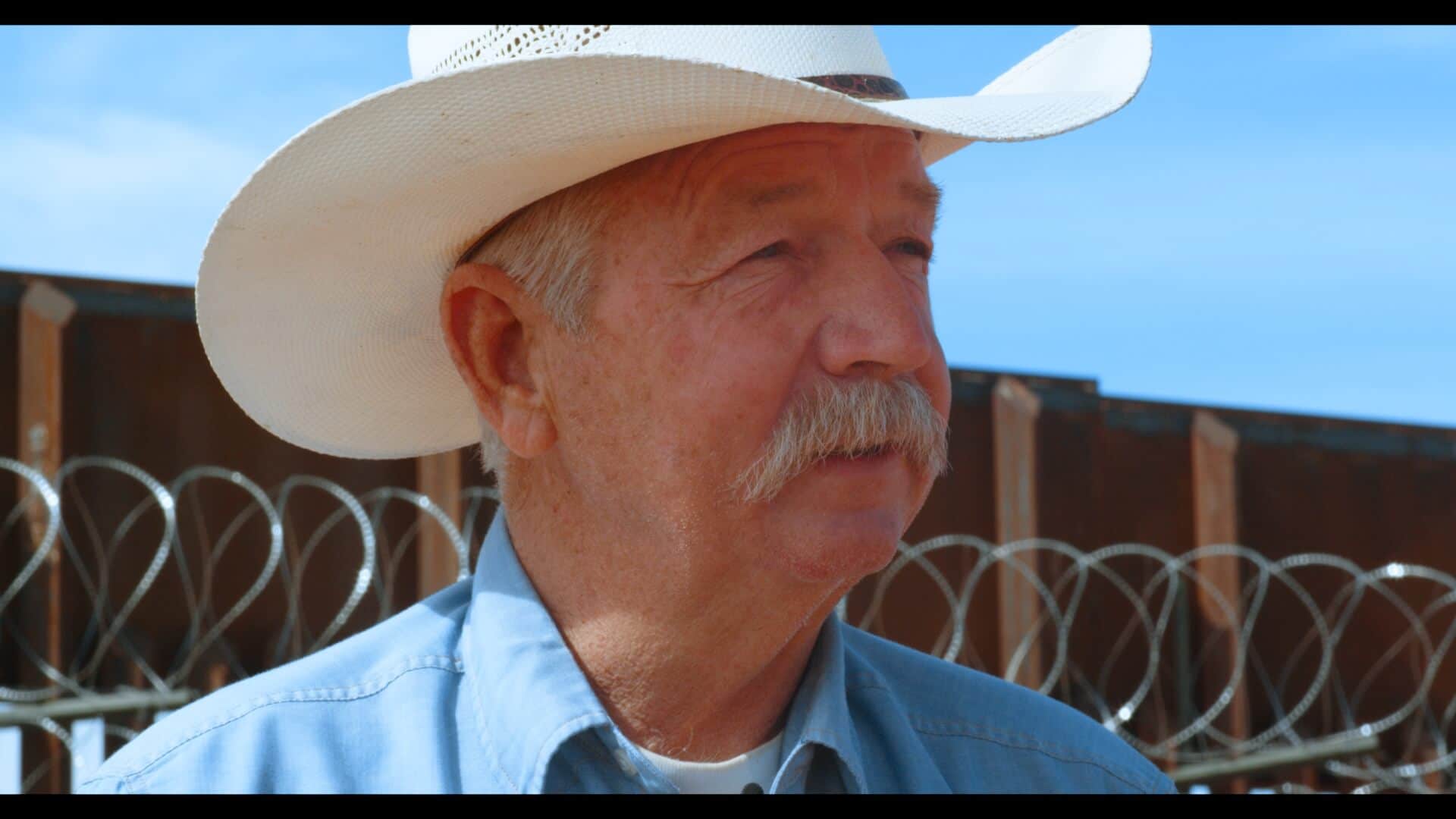 The watchful cattleman unexpectedly, hits the brakes, stopping to make a temporary repair on yet another strand of cut barbed wire and adding another weighty example to his argument that the border is a leaky sieve. His jerry-rigged repair will hold until he can return later with more barbed wire.

“Repairing cut fencing,” he told the team while working, ”Is pretty much an everyday occurrence.”

Ladd and his like-minded neighbors have vociferously advocated to Washington leadership to provide, eyes on, “line-of-sight” BP coverage to fix this dangerous, porous problem.

Listening, one cannot help but to place oneself in Ladd’s particular cowboy boots and try to imagine- not only the isolation, raised costs and additional hard work, but also, that constant sense of uncertainty, and very real dangers his family and employees must carry day and night.