John Ladd: Rancher on the Edge of a Nation- Part 3 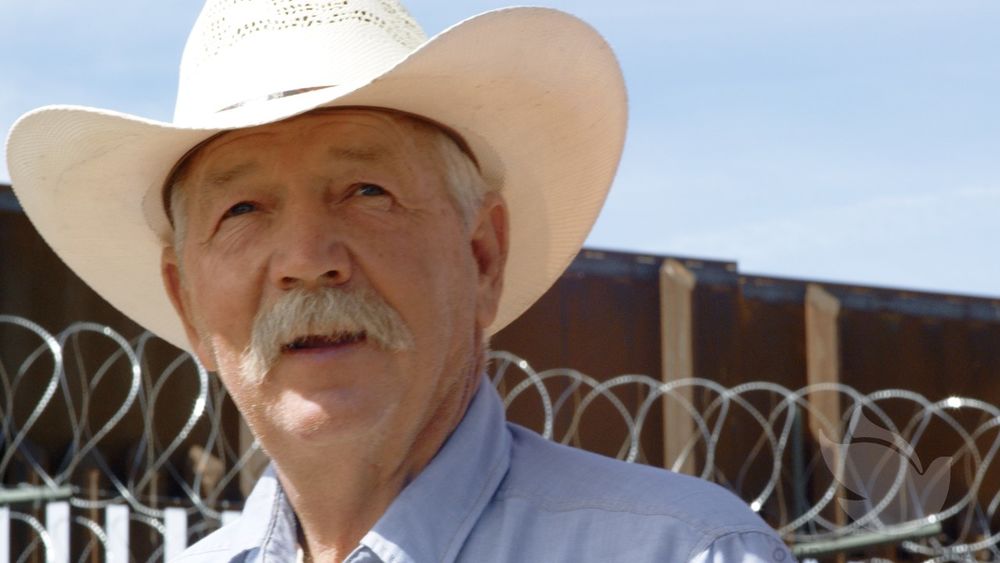 Cochise County has a long, colorful and often dangerous history which includes tales of Apache raids, and even the notorious Pancho Villa. While stories of that rowdy past are mostly forgotten in the annals of history, the decaying relics of Ft. Newell’s military barracks still stand nearby, a testament to the necessity for U.S. law enforcement patrols along a troubled border.

John Ladd, whose family has worked the San Jose Ranch for 123 years, tips the brim of his summer straw cowboy hat in the direction of Naco and tells of very recent, territorial cartel battles between Naco and Sonora. ”Just a few weeks ago there was a gun battle near here, where 20 people were gunned down. In broad daylight” So far, he adds, “As far as I know, the trouble has not bled onto my place; But, we can hear the gunfire.” His assessment was blunt, “Smuggling money and power is what this is all about.”

The patrolled fencing extends an additional 15 miles past Ladd’s property line. Beyond that point, the controversial line is defined by a patchwork of simple barbed wire, underground sensors, the occasional horse patrol and balloons. The San Jose Ranch sits amidst rugged terrain, prime for smuggling of anything illicit- people or drugs.

Ladd gives kudos to Cochise County Sheriff, Mark Dannels who nearly a decade ago formed a Ranch Patrol team to aid area ranch security. In this empty country, far from handy law enforcement, and with over 16000 acres for this rancher to patrol daily, realistically, a 911 call won’t bring instant help.

Asked about the feelings and fears he has for his family’s safety due to illicit trespassing, Ladd’s response sliced to the heart and was not built on bigotry or spooked imagination. His concerns are brutally real and very personal.

The tough cattleman’s voice grew rough as he described the 2010 murder of neighboring rancher and friend, Rob Krentz. His friend was gunned down on his own land. Northeast of Douglas, on Krentz’s own 34,000 acre ranch his family has owned for over a 100 years. Ladd recalls the circumstances without embroidery. “He was out checking water and radioed he had seen an illegal he thought was hurt. When he went to check on him, he was shot down.”

Locals feel the incident was retribution. The murder came only a day after Rob’s brother had reported smuggling activity which resulted in a big marajuana seizure and the arrest of eight suspects. Local law enforcement reported to have used scent dogs to track the unknown murder suspect back into Mexico. Nearly a decade later, the case is a cold testament to the dangers of unfettered crossings. Earthly justice is unlikely to be found for Krentz’s family.

According to Ladd, this was the incident which marked the end of local ranchers offering “humanitarian aid” to illegal passerby’s. “It’s just too dangerous,” Ladd said flatly.

Additionally, he shared details of two U.S. Border Patrol agents who lost their lives in this isolated area in the past decade.. In a follow up interview, Mr. Ladd called both young men his personal friends. Ladd noted the similar circumstances seen in the Krentz murder in the death of BP agent, Nicholas Ivie, 30, on October 8, 2012. Ivie was killed at 2 a.m. while in the lonely desert backcountry on horse patrol. Another agent with him was wounded in the same exchange as the two were investigating a sensor activation.

“Border Patrol came out after the fact and claimed that murder was friendly fire.” Ladd stated, “It’s not true.” He adds his personal belief on the matter. ”The Border Patrol was trying to push the situation under the rug.”

Agent Brian Terry, 40, was a former U.S. Marine and a police officer in his Michigan hometown before joining the USBP. According to Ladd, Terry was based in Naco, but detailed to another unit in Nogales when he was brutally slain. “That’s the kind of guy he was. He always wanted to be out there, on the job, helping.” Part of the Border Patrol Tactical unit, BORTAC, Agent Terry was mortally wounded on December 14, 2010 and died from his wounds the next day. His unit reportedly unexpectedly encountered five individuals of a well-armed cartel “rip team.”

It was Agent Terry, whose murder investigation uncovered the Obama Administration’s Fast and Furious “gun-running” scandal. Attorney General Eric Holder was slapped with a contempt of Congress charge for refusing to release documents regarding the involvement of shady and inexplicable firearms dealings. The investigation, allegedly appeared to implicate not only the Obama administration involvement, but also that of the ATF and DOJ.

While no Washington bureaucrats were censored or fired for instigating such a program; An April 14, 2017 Fox News report by Laura Probucki did state that all but one of the 5 murder suspects in Terry’s murder had been apprehended, and ultimately sentenced to serious prison time.

There are huge profits at stake in narcotic smuggling, spurring enormous risk to those who stumble unexpectedly across a smuggler’s path or are ambushed in the execution of their duties. “Mexico,” he reminds the BTA team, “Is controlled by the cartels. They have more money, and more influence.”

Not only is the current situation dangerously problematic for private property owners and law enforcement; the price of this forbidden journey to poorly provisioned migrants skirting the system to enter America illegally, often costs them their lives.

While uncertain of actual death’s on his property, the rancher notes, “We have found 14 bodies,” narrowing his eyes, he admits there may have been more. “Coyotes (the four-legged variety) can make finding them hard.” Extreme heat in summer and freezing night temperatures in winter can make short work of inadequately dressed migrants who have been lied to, and told they only have a mile or two to reach safety.

Problems at the border are multi-faceted and convoluted. Beyond the unknown identities or backgrounds of illegal ‘s breaking our laws and coming across. Ladd weighs the costs of additional manpower, fencing and surveillance techniques against an absolute need for security and national sovereignty. On the opposite side of this philosophical border fence are the exploding “invisible” costs to the American taxpayers footing a multi-generational bill for increases in educational needs, hospital care, potential disease propagation not to mention new generations of recipients of entitlements and potential for identity, voter and welfare fraud. All this. Elaine Beck points out comes at the expense of our own veterans, our own homeless, the poor and needy.

“President Trump is the first President that has given me hope,” he says. While supporting Elaine Beck’s call for a unified prayer push The cattleman has hope for a viable legislative solution, “before it’s too late,” which will effectively fix the loopholes and turn off the spigot of an unfettered flow of drugs and people. “This is a people problem. The American people need to quit listening to the mainstream media (spin) on this issue.” he stated.

Concluding the morning with a call to action by American voters, Ladd said definitively, “People need to vote out the Congressmen and Senators who won’t do their jobs to fix this problem.”